Webinars on Migration issues between EU and Russia on the background of very disputable politics – RUSMPI with civil society actors from Austria, Russia and Germany 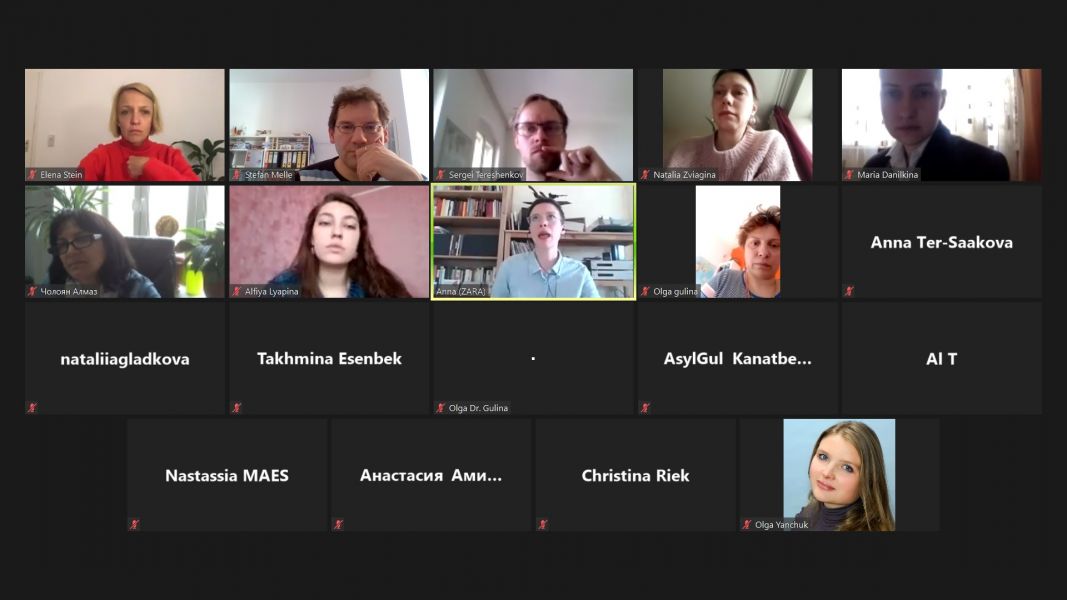 From 25th to 29th May 2020, the Institute on Migration Policy (RUSMPI UG, director Olga Gulina) organised a series of webinars on Migration issues. The speakers mainly represented Austrian NGOs and allowed participants – mostly coming from Russia and Germany – some precious insights into the world of actual migration policies and practices in Austria and Europe. From DRA took part Stefan Melle, director, and his assistant, Martine Noussan. The webinars were moderated by Lena Stein, director of CISR e.V. and DRA-board member, and they replaced a Study trip of the Working group (WG) on migration issues of the EU-Russia CSF, which also supported the webinars.

It took place on the background of very disputable migration politics – including such issues as unresolved perspectives of the Dublin II-agreement and apportionment of incoming refugees in the EU, the severe situation in the refugees camps in Greece and Italy, a huge number of long lasting asylum court procedures, questions of labor migration between Central Asia and Russia on the one hand, and from Russia and post-soviet space and post socialist countries to more western EU-countries on the other hand.

The important role played by Civil society actors in supporting and helping refugees and asylum seekers to integrate in local communities emerged clearly in the webinars, as well as the many achievements they have made in their work. Some examples: The Integrationshaus in Wien could create a multicultural space in the 90-ies, that offers a wide variety of services and learning possibilities to its residents along with fostering the intercultural exchange with people living in the surrounding areas. The international organization Flüchtlinge Willkommen gives refugees and asylum seekers the opportunity to live in shared flats with locals, with the aim of making people overcome the fear of the “other” and promoting exchange and intercultural dialogue, all important steps towards the building of more inclusive societies.

However, there are still many challenges and problems ahead, just to name a few: xenophobia and intolerance towards migrants has increased in Europe in the last few years; the Corona pandemic has negative consequences on migrants psychological and legal situation; asylum seekers have to wait a long time to receive a decision on their claim and in the meantime they are not allowed to work.

A special case is the asylum practice concerning people from Chechnya and other parts of Russian North Caucasus who often arrived many years ago – NGOs usually try to help them to stay and to get or to keep the preliminary or even better final residence title. But today the armed conflicts, and especially the two Chechen wars, are gone, often families use the improved situation to visit their country and regions of origin – therefore officially, due to existing legal framework, it is hard to argue for their stay and to be granted the asylum status in the EU. Indeed, the risk for returnees as a rule remains high, if they were personally part of the conflict sides – and even more, if they fled the regime of Chechen leader Ramzan Kadyrov, being in opposition to him or part of threatened vulnerable groups, as representatives of LGBTIQ* - they will be in direct danger for life after the return, and the option to settle in another region of Russia, regularly supposed by courts in Austria and in Germany, is often a fiction. This complex of issues will, probably, remain a difficult one for the courts and legislative bodies – and an item of discussion, which NGOs in EU-countries will have to proceed.

The Webinars gave participants rich food for thought on many critical aspects of the migration issue. Further collaboration should also be possible through CSF Migration Working Group (WG) and the Europe Lab Platform, two formats of the EU-Russia Civil Society Forum. Unfortunately, though the WG was already initiated in 2015 (in particular, by DRA), it did not found so far a way to really deal with the challenges of the migration and integration policies in the EU and Russia – one of the core issues to tackle in the future in Europe. Possibly, the webinars were able to give an impulse to start co-operating on this topic.